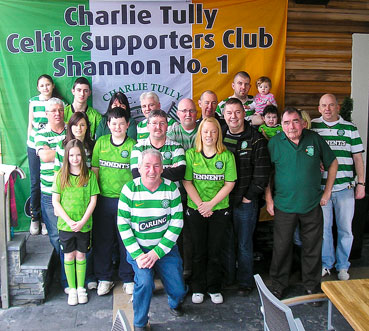 Photo: Members of the Charlie Tully Celtic Supporters Club in their Shannon Knights base

Back in 1983 the old back bar in the Shannon Knights was a constant hive of activity, between pool, darts, horse racing, and the inevitable talk of Saturday afternoon soccer.

All the regulars could be depended upon being there, more often than not they sat in the same seats they had occupied since establishing the Knights as their local pub.

Beside the door to the toilet, on the red bench seat running the length of the bar, sat the nucleus of the patrons who frequented “H Block” as the back bar was often referred to.

Among them were Big Tommy Mc Dade, Jackie Pike, Charlie Murray, Red Austin, Jimmy Delaney sr, Brendan Bracken and a other well known characters like Gerry Fox and Eddie O’Brien. This was the main hub of the Shannon Knights bar, at the time the town’s best known community centre.

From within this group Glasgow Celtic stalwart Charlie Murray, big Tommy McDade, Jackie Pike and Charlie ‘Pitcher’ O’Loughlin decided to form the Charlie Tully Celtic Supporters Club. In retrospect, the formation of the club had an inevitability about it given the phenomenal support that Glasgow Celtic had in the Shannon area.

With the club now formed and Jackie Pike elected the first chairman, the club set about gathering members. In a very short space of time it had grown from being talked about to having more than 100 members.

A Celtic legend, Pakie Bonnar, one of the all time greats to have graced the playing field at Parkhead, made the trip over to officially launch the club. The Charlie Tully CSC was well and truly established.

The first few trips to Glasgow by members to see the ‘Hoops’ play in Paradise were made by coach and boat. Kieran Meehan had the unenviable task of being the driver. Unenviable because on one such trip aback tyre came loose and overtook the coach giving Kieran and the passengers quite a shock.

With the advent of Ryanair, the journey to Glasgow is quicker and less arduous nowadays. The added bonus of Sky TV screening a lot of Celtic’s games, especially the ‘Old Firm games, means that todays supporters have much more access to both travelling and watching games.

Charlie Tully CSC enjoyed a lot of success in its formative years and thereafter. Some of Celtic’s best players came to meet the fans, notably Stillian Petrov, Paul Mc Stay and Pakie Bonnar. The club also had some of Celtic’s coaching staff over to visit for a few days giving lessons to some of Shannon’s aspiring soccer stars.

Over the last six or seven years the club has gone through something of a transition, having had a few quiet years when there wasn’t much happening. Thanks to the intervention of honorary president Jackie Pike and newly elected chairman Jimmy Delaney the club is thriving again.

Regular meetings, charity events, club trips and more interaction with club members have raised the club’s profile. In turn it is more accessible to Celtic supporters and has raised more than €24,000 for charities such as Our Ladies Hospital For Sick Children, Milford Hospice, Clare Haven and a few others.

Thanks to Jackie and Jimmy, the club is now better and stronger than ever. With the present day chairman Barry McEntee supported by a hard working committee consisting of Alana McEntee, Davy Brady, Paul Carr and Brian Mc Gorrian, the club goes from strength to strength.

Thanks to the support of Ciaran Quish and the Shannon Knights, which is still home to the Charlie Tully CSC, the atmosphere during televised ‘Old Firm’ games is something to experience.